A Reflection on the All Saints Requiem 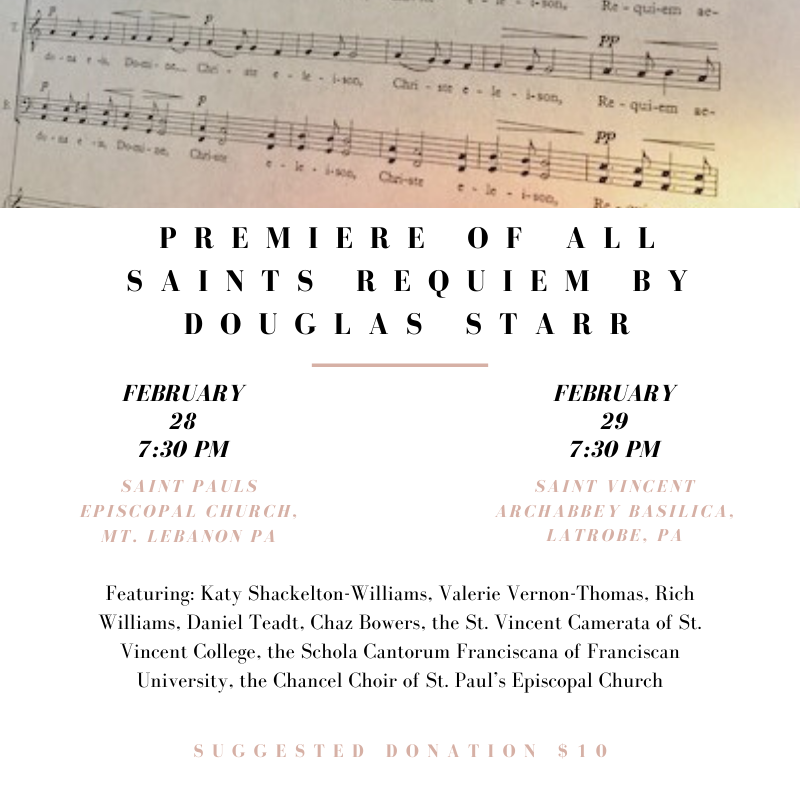 Perhaps you grew up in a tradition that celebrates a Mass for the dead. Perhaps you know that the colloquial name for the music that accompanies the mass, the “requiem” comes from the plea in the first line of the Introit: Requiem eternam dona eis, Domine (“Rest eternal grant to them, O Lord”). Or perhaps your first exposure to the Requiem came through Milos Forman’s 1986 Amadeus, which staged the composition of Mozart’s Requiem as a gripping (if only colorably historical) murder mystery, an individual’s race against time and his own failing body to write something that would resonate eternally. The music of a requiem incorporates texts from the Ordinary, the Kyrie and Sanctus and Agnus Dei, songs that we sing regularly and consistently. Musical settings of the requiem also use music from the Proper, from specific celebrations. A requiem moves through a series of sentiments: it faces death in with fear, awe, and hope. A requiem moves from the reverent, fearful posture of “Dies Irae” to the serenity of “In Paradisum.” While the words of the requiem are borrowed from the Mass, some composers have recognized that, as an experience, death is both universal and personal. For example, Benjamin Britten’s War Requiem employed the words of Wilfred Owens to confront the horrors of World War I while Johannes Brahms eschewed the words of the Latin mass for the words of reformer Martin Luther.

Dr. Douglas Starr’s All Saints Requiem follows in this rich tradition, recognizing that memory is both corporate and individual. He relies on the traditional words of the requiem, but he does not let his prayers rest (pardon the pun) there. He conceived of this piece as a celebration of all saints, including his personal saints. Dr. Starr’s father, a minister in the Foursquare Gospel Church, would have scoffed at the notion that any believer was more worthy of sainthood than any other…but his words are woven into the text of the All Saints Requiem, reflecting on the nature of the Lamb of God. A poem by Dr. Starr’s mother is balanced against the plea of the Recordare, a prayer for Christ to remember the faithful believer and the purpose of Christ’s sacrificial death. The All Saints Requiem extends and responds to the religious and musical traditions that Dr. Starr embraced when he joined the Episcopal Church. Its music resounds in the long line of composers (Brahms and Berlioz, Faure and Durufle, Verdi and Rutter) moved to write their own settings of the mass. The All Saints Requiem is also a deeply personal reflection on family and faith, recognizing the belief that all Christians are saints, that we are all partakers in Christ’s sacrifice and triumph.

St. Paul’s Chancel Choir, along with choirs from Franciscan University in Steubenville, Ohio and St. Vincent’s College in Latrobe, will present the premiere of Dr. Starr’s All Saints Requiem at 7:30 p.m. on Friday, February 28. Please join us in remembering all saints, those whose names are carved on the doors of churches and those whose names are written in our hearts.

Sunday
On Sunday, February 23 we will have a combined 9:45am service followed by our Annual Meeting and All Parish Brunch (6pm and 8am maintain their regular weekend programming).
Sundays: Fall, Winter & Spring (Current)