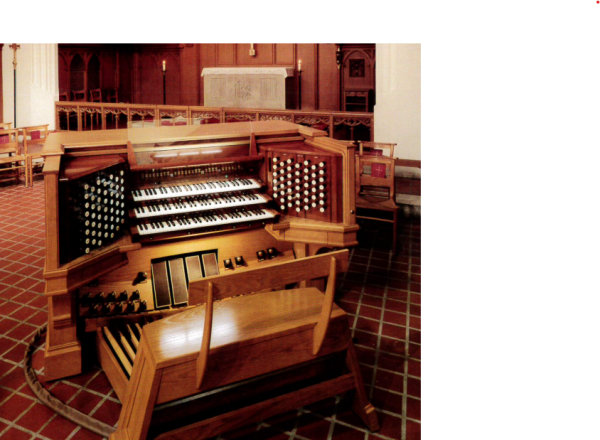 Most of you have heard the organ, seen the pipes that are visible, and felt both the musical power and silken tenderness that it can express. As we approach the twenty-five-year anniversary of our Schantz Pipe organ, I’d like to describe its physical and aesthetic characteristics.

Chuck Little, Organist and Choirmaster Emeritus, described the new organ in 1998:The Chancel Organ has a movable three-manual console and 52 ranks of pipes. The Great and Pedal Divisions are exposed on either side of the high altar. The Swell Division is in the left organ chamber and the Choir Division and several Pedal Division pipes are in the right organ chamber. The Gallery Organ has a two-manual console and 12 ranks of pipes, including the Trumpet en Chamade. The Gallery Organ can be played from the Chancel console. Conversely, the Gallery console contains ten general chancel pistons, enabling the organist to play the chancel organ from the gallery console.

Chuck knew the component parts of a pipe organ and how the Schantz instrument, with its 64 ranks and 3,766 pipes, unites with church architecture to effectively accompany our singing, and enables the organist to play a wide range of historic organ music repertoire.

We can describe our organ’s aesthetic virtues by amplifying the latter statement, above, “to effectively accompany our singing and enable the organist to play…”

Categorically, our pipe organ is “An American Classic,” an instrument designed to effectively play music from all musical eras, from flute sounds of the late Italian Renaissance, brilliant mixtures of the High German Baroque, to the reedy nasality of French repertoire. With its soothing, supportive Principal stops, it nicely accompanies our congregational and choral singing. We are blessed to have a pipe organ that does it all.

As you can see from the picture, the Schantz organ console design, woodwork and metalwork make it visually appealing. It frames our cherished stained-glass windows, both front and back of the church. The pipe casework and the consoles pick up on design features of parish fixtures, the altar space, the pulpit and altar rails. It is a work of art in both tonal design and architecture.

In every liturgy that is musically led by our Schantz pipe organ, we hear the heart of the Anglican tradition. In worship and in recital, it helps proclaim, “both the beauty of God’s creation and the grace and power of the Good News concerning Jesus, God’s Son.”

Director of Music and Arts

On a personal note, “My musical life is a synergetic blend ofand affection for 19th century and early 20th century American gospel hymnody (that no church really sings any longer) and the treasure of sacred music from Bach to Ives.”