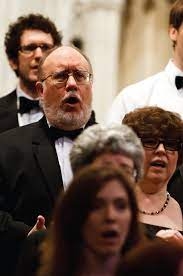 St. Paul’s Music Ministry has been given ongoing financial support for and distinction to our Choral Scholars program. In appreciation for and recognition of this gift, the Vestry has named this program as, “The Sam and Diana Harbison Choral Scholars” Over the years, the Harbison's have supported our ministry as Friends of Music, helping to fund special concerts and other activities with undesignated financial gifts. After Sam’s death in 2019, Diana wished to designate all gifts to a specific purpose and chose to fund our Choral Scholars Program for which we are deeply grateful.

Sam was an executive at Google and was well-known in the computer programming world, having written a book on the “C” programming language, used by countless students. He believed in the transformative power of singing and affording every person the opportunity to joyfully participate in making music. Diana was trained as a nurse and then attended Princeton Theological Seminary. She is currently pastor in the congregation of Pine Creek Presbyterian Church, Fox Chapel, where she has served since 1982. Neither Sam or Diana attended St. Paul’s but, from their love of music and our music ministers, seek to help sustain our music ministry.