Getting to know our new Assistant Rector, the Rev. Erin Morey 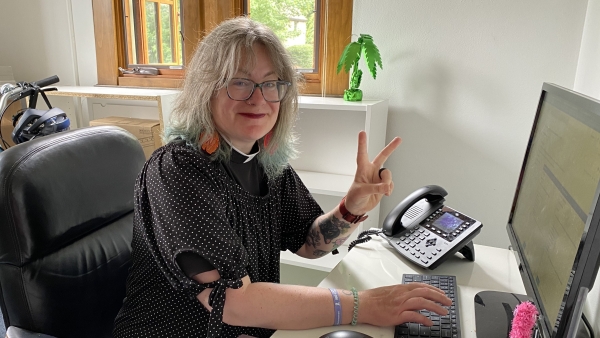 The Rev. Erin Morey started working as the Assistant Rector of St. Paul's on July 1st, and we are very excited to welcome her! Here in this conversation, we learn a bit more about Erin's journey thus far.

Tell us a little about your journey to ordination.

It’s been a long journey! I grew up in New Jersey in the Roman Catholic tradition. I can remember playing “Mass” with my sister and friends when we were little kids, and I would pretend to be a priest celebrating Communion for them. Eventually, I moved to Pittsburgh to go law school, and became a public defender here in Allegheny County. I found working with my clients in crisis very fulfilling, but I felt called to some sort of work where I could support people before they found themselves involved in the criminal justice system. I began working for Women’s Center & Shelter of Greater Pittsburgh, an agency that supports survivors of intimate partner violence. By this time, I’d already begun worshipping in the Episcopal tradition, and I had the opportunity to serve as one of the Episcopal Church’s delegates to the United Nations Commission on the Status of Women. While I was there, someone asked me if I’d ever felt I might be called to ordained ministry, and I realized I might be. I read the autobiography of the Rev. Dr. Pauli Murray, who was the first Black person who didn’t identify as a man to be ordained a priest in the Episcopal tradition. The Rev. Dr. Murray had also been a lawyer before their ordination, and reading their story inspired me to continue to discern whether I might also be called to ordained ministry. I received a scary cancer diagnosis in 2017, and I am incredibly grateful that I responded very well to treatment and recovered fully. But, in that moment, I knew that I would be disappointed if I came to the end of my life without having questioned if God was calling me to ordained ministry. So, I began officially working on that process, and it’s led me here! It has been a joyful, grace-filled journey!

What were you doing before you became our Assistant Rector?

For the past three years, I was studying at Pittsburgh Theological Seminary, as part of the process of preparing to be ordained. I also returned to working for Women’s Center and Shelter of Greater Pittsburgh when they started a new text / chat service to help survivors unable to leave their homes during the pandemic. I chatted online with survivors who reached out to us; and I also answered calls on the shelter’s telephone hotline, and worked with the shelter residents.

What are you most excited about in your new position?

I have always been deeply moved by the way the Civil Rights Movement in the United States has been shaped by the courage and faith of the people working for justice. I am excited that I will be working with St. Paul’s Social Justice and Anti-Racism Commission, and Sustainability and Creation Care ministries, as we participate in the peace and love of God’s beautiful Creation, and Beloved Community! Also, for a long time at the Women’s Shelter, I’ve enjoyed speaking with people about hope and healing. I am incredibly grateful that God has now led me to a place where I have the opportunity to participate in the hopeful, healing grace God pours out through the sacraments.

What do you like to do when you aren't at St. Paul's?

I am really, really curious about the world and love to try new things, so I’m always finding some waterfall or ice cream parlor or museum or goofy roadside attraction and taking a mini-road trip to visit it. I especially like being outdoors. I love learning about nature, and seeing plants and animals. When I’m at home, I love to read, listen to music, and hang out with my pets (I have cats, rabbits, and a dog). I also really like thrift shopping, and finding fun secondhand clothes!