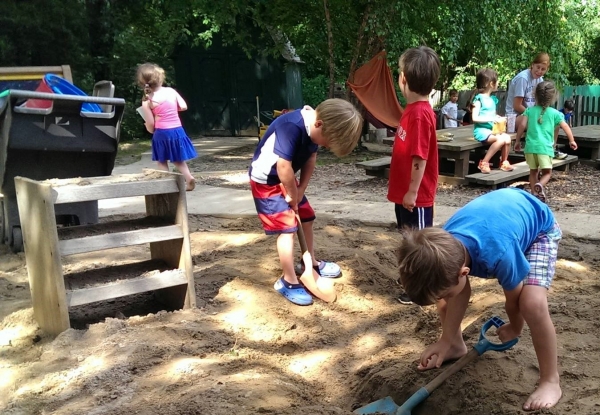 The mission of St. Paul's Episcopal Nursery School is to provide a play-based early childhood program that utilizes best practices while nurturing the uniqueness of each child.

For over 60 years, St. Paul’s Episcopal Nursery School has served the children of our community as a warm and enriching place to play, learn, grow and discover. Our preschool curriculum encourages age-appropriate independence and self-regulation; our educators strive to help children comfortably persist with new challenges and activities within the framework of a consistent daily schedule.

St. Paul’s places primary importance on creating opportunities for children to learn by engaging with the world around them through literature, developmentally appropriate math and science activities, music, art, movement, creative problem solving, and through all forms of play. The school is a member of The National Association of Episcopal Schools.

Eileen was named the Director of St. Paul’s Episcopal Nursery School in May 2017 after serving as Interim Director for the 2016-17 school year. She began working at the nursery school in 1989 as a classroom teacher. Eileen is co-founder of Jeremiah’s Place, Pittsburgh’s first and only crisis nursery that opened in 2014 in the Lincoln-Larimer neighborhood of Pittsburgh. She has spent most of her professional and volunteer time as an early childhood educator and advocate.

Eileen previously worked for The Homeless Children’s Education Fund, was a Together Time instructor for a pilot program through the Fred Rogers Company, an instructor for Friends of Child Find Inc., and the first Coordinator for Mt. Lebanon’s Teen Center. She and her husband Dave were foster parents with The Children’s Home of Pittsburgh and cared for twelve children over a ten-year period.

Eileen and Dave joined St. Paul’s Church as newlyweds in 1986 and initially spent time volunteering with the youth group. They have been involved in a variety of ministries over the years. The Sharbaughs are recent “empty nesters” and parents of four young adult children; Hannah, Sarah (married to Billy), Nathan, and Rachel; all of their children attended the nursery school in the 1990’s and grew up at St. Paul’s Church. In addition to her role as co-founder Eileen is also a board member for Jeremiah’s Place. She has previously served on the Vestry and been a board member for other community organizations such as Outreach Teen & Family Services, Century United Soccer Club and Sheldon Calvary Camp.